Note: this is an edited version of a column for The Daily Maverick 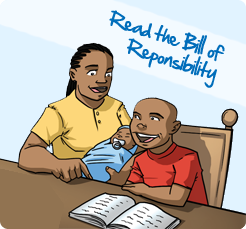 It has been a month since the department of education, LeadSA and the National Religious Leaders’ Forum launched their Bill of Responsibilities. Some criticisms of the bill were forthcoming from Ivo Vegter, Khadija Patel and myself (here, here and here). We had concerns regarding various aspects of the Bill, ranging from whether such a bill was necessary at all, to the appropriate role of the state in relation to such a bill.

One of the criticisms levelled at those who expressed opposition to the Bill was that “we need to do something”, with Yusuf Abramjee of LeadSA going so far as to deride “armchair critics” (Facebook link) who (according to his caricature, at least) do little but carp from the sidelines.

This characterisation is untrue, and unfair, as there are various ways of expressing concern regarding the state of South African society, and working towards its betterment. If parts of civil society are of the view that a particular measure – such as the Bill of Responsibilities – is counterproductive for what they imagine to be a healthy South African society, it does little good to attack their motives and character, rather than the substance of the critique.

This is not to say that a bill of responsibilities is necessarily counterproductive to goals such as fostering a healthy society – my concerns addressed one specific Bill, rather than the idea of such a bill in general. And while it is true that many of the salient details such a bill might include are already embedded in the spirit of the South African Constitution, the Bill of Rights is mainly a document of the role of the State in protecting the rights of citizens.

In addition to that – and particularly, now that LeadSA have offered such a document – it could be useful to remind ourselves of what responsibilities we as citizens have, if we are to secure and build on the sacrifices and efforts entailed in our being able to enjoy the privileges of living in a democratic and (mostly) free society.

I’ve therefore been giving some thought to what such a document should look like, bearing in mind the criticisms of the existing document made by myself and others. What you see below, then, is an alternate Bill of Responsibilities, intended for freedom-loving South Africans who also desire a healthy future for this country, but who think that this can be achieved without an excess of paternalism, and without intruding on the liberties secured in our Constitution.

Comments and suggestions for revision are welcome, although it should be born in mind that moral prescriptivism and other forms of paternalism run contrary to the spirit of this suggested bill, and will thus not only be difficult to accommodate, but will also be unlikely to meet with any sympathy. An underlying premise running through the document is that of a commitment to individual liberty, which means that if you are of the view that other values are more foundational, we’re unlikely to agree on much.

Also, while LeadSA’s bill was explicitly aimed at the youth of South Africa, the bill presented below is written for adults. Once the document is revised (and potential feedback incorporated), I hope to draft a simplified version that is more suited to South Africa’s youth.

A Bill of Responsibilities for the citizens of South Africa

I accept that the rights enshrined in the Constitution of the Republic of South Africa lay a strong foundation for a country that is free, and in which all of its people are equal. I also accept that the Bill of Rights lays out unconditional rights for the all citizens of South Africa, and that the primary responsibility for the protection of those rights rests with the state.

I accept that while any legal responsibilities I have to my fellow citizens are codified in statutory law, I can nevertheless impact on those around me in positive and negative ways, regardless of the legal status of my actions.

1. To recognise that actions have consequences, and that other people are often as committed to their interests, and as convinced of their point(s) of view, as you are to yours.
2. To recognise that no citizen is by nature better than any other, and that any preferential treatment for one citizen, or a group of citizens, over others requires impartial justification.
3. To recognise that choices are made inside a legal framework, where what you do might result in repercussions if that action illegitimately defeats the interests of others.
4. To recognise that you live inside a social framework where you define yourself, and therefore people’s expectations of you, based on your words and actions. Our reputations, and the amount of trust others place in us, are informed by the information we have provided about ourselves.
5. To recognise that our behaviour is not guided and limited by the law alone. We make promises and develop relationships, both of which result in other people having legitimate expectations as to our behaviour.

6. To recognise that even where actions might not be illegal, they can nevertheless cause others to lose respect for you. Your failure to look after the interests or possessions of others could result in decreasing their desires to contribute to your needs or defend your interests.
7. To recognise that when you abuse any power you might hold over others, you assume that your interests are more important than theirs. People who are abused in this fashion are justified in being angry and resentful at this treatment, and could be expected to lose respect for you.
8. To recognise that when we find ourselves in positions which involve representing the interests of others, if we fail to take those interests into account, we are betraying their trust, and breaking a promise.
9. To hold Government to account for meeting the legitimate expectations of citizens, through measures such as voting, legal protest action, and persuading fellow citizens of their role in contributing to holding Government accountable.
10. To recognise that that your choices can impact on the welfare of others, and that altruism from others cannot be assumed. However, showing kindness and respect for others is usually rewarded by them treating you in the same way. If you don’t contribute to the welfare of your fellow citizens, you have no reasonable expectation that they contribute to yours.

On thought and speech

11. To recognise that your knowledge is certainly incomplete, and that a dogmatic insistence on the superiority of your viewpoint is rarely justified.
12. To acknowledge that because of this, you should try to seek out as much information as you can, and assess that information as impartially as you can, before thinking that you know the answer to a question.
13. And furthermore, that because we may have access to different information, and assess that information in different ways, that others have the right to criticise your point of view.
14. To recognise that if your primary commitment is to reaching justified points of view, you should welcome serious critical interrogation of your arguments even when it might be uncomfortable to have your views challenged.
15. To understand that fair criticism should be understood as relating to the arguments you have presented, rather than as an attack on your personal value as a citizen.
16. To recognise that if your primary commitments do not include reaching justified points of view, others have no responsibility to take your point of view seriously.

On patriotism and the future of South Africa

17. South Africa’s Constitution, particularly the Bill of Rights, charts a future in which all citizens are free to determine and express their own values, except where those values conflict with the limitations defined in the Constitution. Citizens should expect the state to ‘respect, protect, promote and fulfil the rights in the Bill of Rights’. SA Constitution, 7(2).
18. Supporting your country entails obeying all demands of law, and the instructions of those who are delegated to enforce it.
19. However, we should remember that laws can be unjust or unreasonable, and that citizens are entitled to question or challenge applicable laws through any legal means available to them.
20. In challenging the decisions or actions of the state, or any entity associated with the state, citizens should remember that any pressure exerted in an attempt to silence such challenges is a violation of their rights to freedom of thought and expression.